Lewis’s was established by William Lewis, the great, great, great grandfather of the present owner, in 1835. Originally new and secondhand furniture dealers, they were based at the “General Furnishing Warerooms” in Silver Street – still our headquarters today. On William’s death, his wife Emma took over the business with their sons Charles and Edward and daughter Mary Ann and named it E. Lewis & Sons. By 1881 Lewis & Sons were also cabinet makers and upholsterers employing 10 men in the Silver Street premises which at this time was part showroom and part workshops with machinery powered by a seperately housed engine.

Horse drawn vans in 1905 at the GWR stables in Barbican Road. William Lewis in the bowler hat.

At the same time the furniture removal business was operated from stables belonging to the Great Western Railway on the site of what is now the Taw Garages filling station in Barbican Road. Horses were hired from the GWR to haul the vans locally while long distance removals were carried out by rail. Removable containers were craned from horse-drawn to railway wagons or furniture was packed into rail vans. Removal teams were sent by rail to meet the vans for unloading and to hang blinds and lay carpet and linoleum which we supplied.

A serious accident occurred in 1881 when a horse drawn van overturned and a long standing employee called Bennett was killed at Chittlehampton. The team including Mr. Edward Lewis was moving the Vicar of Chittlehampton to Folkstone and were en route to Umberleigh railway station when the heavily laden van ran away on a steep hill.

As the horse-drawn era came to an end, Edward’s sons William and Walter concentrated on removals in Barnstaple while Lionel traded in South Molton. In 1920 William bought the first petrol lorry and the Silver Street premises were used more for furniture storage although the family still lived in the house at the centre of the building.

After the war, Eddie Lewis purchased 2 new vans and built the body of one of them himself – a major task while running a removal firm. In the 1960s a new house was built on the site of 2 old cottages next to the warehouse and the family moved out of the old house freeing up space for more storage and bigger vans. 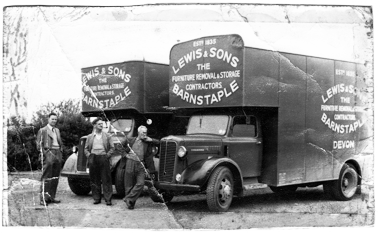 The body that Eddie Lewis built on the right. His son David on the extreme left.

In the 1970s and 80s David Lewis oversaw the purchase of new vans and a new warehouse at Roundswell and removal work was undertaken for the RAF at Chivenor, local authorities and many local businesses. However it is the household removal and storage sector which has provided the mainstay of Lewis & Sons business for the last 100 years.